The US$5 trillion opportunity Asian businesses cannot afford to ignore

A new report from the Business and Sustainable Development Commission makes the case that Asian companies can profit from the SDGs. It also warns that if the private sector does not seize sustainable business opportunities, the region will suffer the consequences. 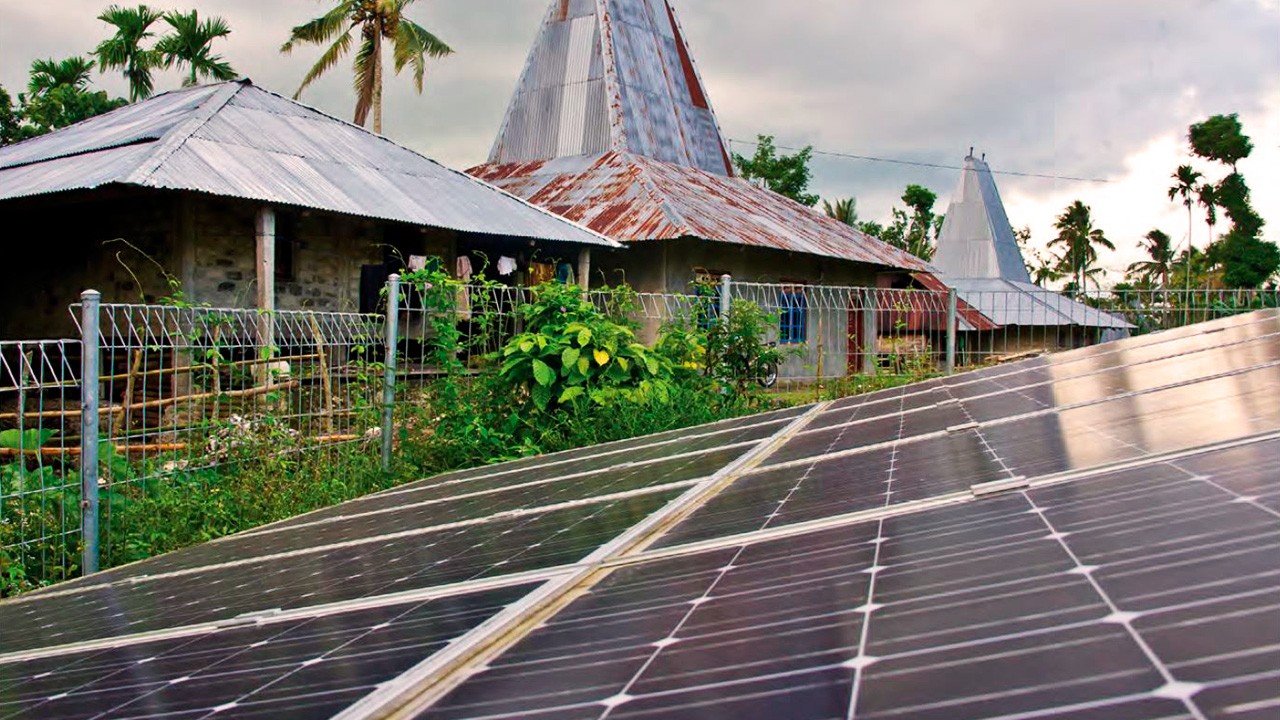 It was a heartening coincidence. As Asia’s business community was left wondering what the United States quitting the Paris climate change agreement might mean for their markets, a United Nations-backed commission released a report suggesting that Asian companies would miss out on trillions in business opportunities if they ignored the most pressing issues of our time such as climate change.

Also known as the Global Goals, these 17 targets are meant to guide development efforts and address challenges such as poverty, health, education and climate change.

The BSDC, launched in January 2016 by the United Nations Council, is a London-based organisation which promotes sustainable development as “the greatest economic opportunity of a lifetime”.

Its commissioners are a who’s who of business and civic society leaders, including founder of Alibaba Group Jack Ma, Temasek CEO Ho Ching and Olam Group CEO Sunny Verghese.

The report begins by acknowledging the devastating consequences that the region’s rapid economic development has had on the environment over the last decade.

It makes a bullish projection that Asian businesses could generate US$5 trillion by moving to more sustainable ways of making money over the next 13 years.

The business opportunities for SDG-driven companies in Asia are bigger than anywhere in the world, according to the report, which was drafted by the UN Council with contributions from growth strategy firm AlphaBeta and Singapore investment firm Temasek. The report was released at Ecosperity, Temasek’s annual sustainability conference.

Accounting for 40 per cent of the global total, sustainable businesses will create 230 million jobs by 2030, and help to narrow an inequality gap that has widened worryingly as the world’s most populous region has grown richer.

Some 80 per cent of Asia’s population lives in countries where inequality has risen over the past 20 years.

Unsurprisingly, the biggest business opportunities lie in China, a country whose economy has grown 10 times as fast as the United Kingdom’s during its industrial revolution and affected 100 times as many people.

This growth has come with a heavy price, however, with China suffering huge environmental and social problems, such as polluted soil, air and water from heavy industry. The report stated that businesses stand to make US$2.3 trillion from solving them.

Affording housing emerged as the biggest opportunity by sector in China and the rest of developing Asia - more than inclusive healthcare, electric vehicles or sustainable food production.

More than 107 million urban households live in sub-standard housing in China, India, Indonesia, Bangladesh, and the Philippines, and businesses could generate US$295 billion from building affordable, sustainable homes, the study found.

For Asia’s developed countries, particularly Japan and Korea, the greatest opportunities lie in creating circular systems in the automotive and appliances sectors. 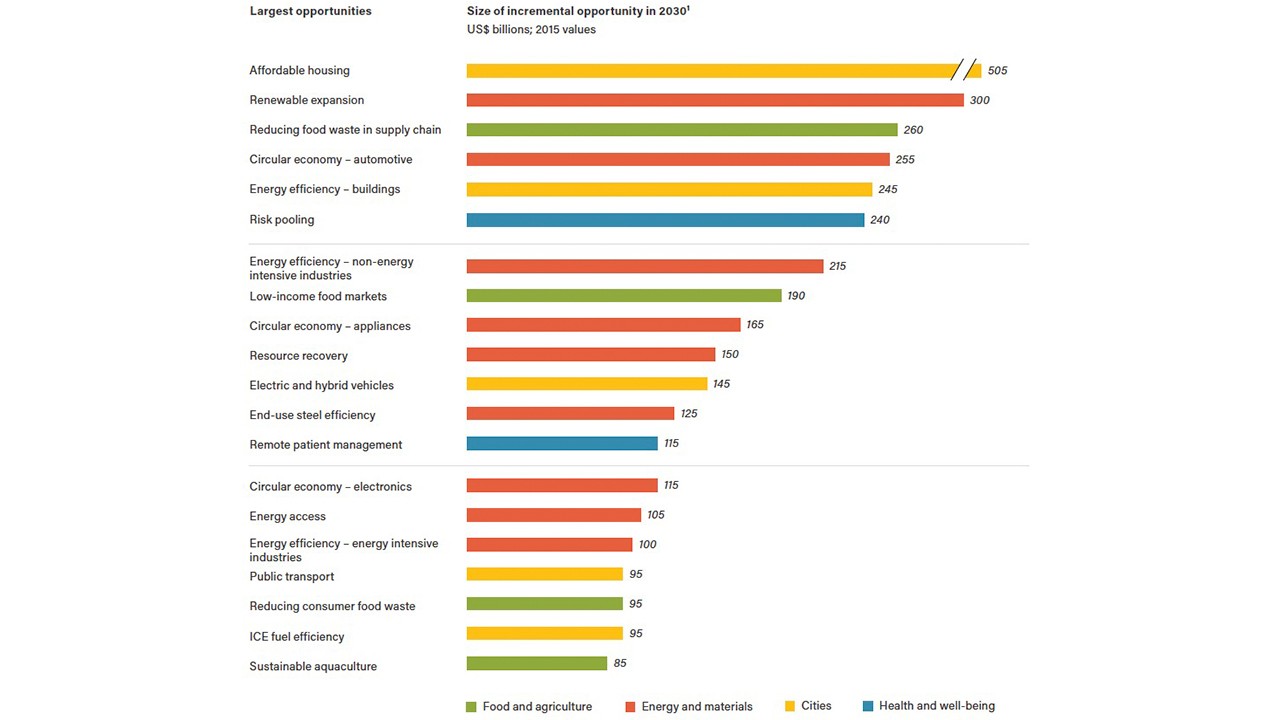 The 20 largest opportunities account for over 70 percent of the total US$5 trillion prize in Asia. Image: BSDC Asia report

The cost of doing nothing

Asia is known for corporate conservatism and a weak appetite for risk-taking, but business-as-usual could prove to be riskier.

The Asian Century could come to be best known for environmental and social problems that put regional economic progress into reverse.

For instance, damage to ecosystems and loss of biodiversity in Asia could cut gross domestic product globally by 18 per cent by 2050, up from 3.1 per cent in 2008, the report points out.

The region’s education systems are not doing enough to give young people access to good schooling to prepare them for fast-changing industries, and a lack of access to healthcare, clean water and sanitation in developing Asia is cancelling out advances made in treating diseases such as tuberculosis, cholera and malaria.

Meanwhile, obesity is rising at a faster pace in Southeast Asia than in the United States, and APAC is home to a third of the world’s smokers - a health timebomb for the region’s ageing population.

However, the report is highly optimistic that the region can take on the big sustainability challenges that it faces.

Asia has, it observes, “sturdy, capable” businesses with value chains involving millions of enterprises, governments “willing and able” to shape investment in the right direction, and cultures that “generally value protecting the environment, avoiding waste, and promoting social justice and education.”

Building a business around a problem

One common criticism about the SDGs is that they are too vague for businesses to see their value, and that is particularly true of small-to-medium sized companies that are in the vast majority in Asia.

What do global goals like, say, climate action or zero poverty mean to a small chain of printing shops in Singapore or a noodles maker in Indonesia?

What the Better business, better world report does is show companies how to build a business around an SDG that is relevant to what they do, and how to reframe the region’s environmental and social threats as growth and development opportunities.

A palm oil company in Indonesia stands to gain from supporting the lives of independent smallholder farmers with training on how to cultivate land more productively, clear land without burning it, and by providing schooling for farmers’ children. The result? Less deforestation, and a major contribution made to the SDG targets on climate action and life on land.

Energy companies stand to gain US$300 billion from the expansion of renewable energy in Asia Pacific, a region where energy demand is expected to almost double by 2030. Renewables will serve to reduce air pollution, one of the biggest causes of premature deaths in the region, and support the SDGs on climate action and affordable, clean energy.

Car manufacturers in Asia could also support the SDGs on sustainable cities and industry innovation by moving into world’s largest, and one of the fastest growing electric vehicle markets. EV sales in China - home of the world’s largest battery maker CATL, the largest electric car and bus firm BYD and also the world’s worst air pollution - were more than four times higher than EV sales in the United States last year.

The need for leadership

In the vacuum created by the US withdrawal from the Paris Agreement, the world will be looking to Asia for direction. As the region grows in economic and demographic status, it can take leadership in tackling issues such as climate change and it is imperative that the region seizes the sustainability opportunity at this stage of its development.

In this respect, Temasek’s Ecosperity – so-called as it twins ecology with prosperity – is a timely meeting of CEOs, innovators, policy-makers and thought leaders from across the globe who will be discussing the next steps needed for the region’s sustainable growth.

The BSDC report also provides the much-needed guidance for Asian companies on where the business opportunities lie in the SDGs, and shows that - if they get it right - their businesses will be more resilient, profitable and prepared for a future that may be determined by their actions. 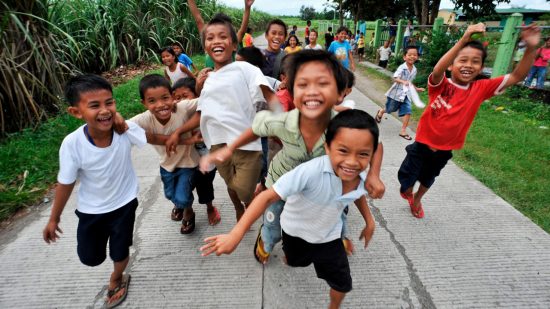 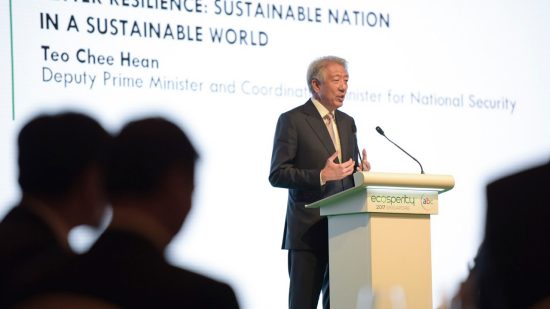 Next Article
The four pillars of Singapore’s sustainable development success 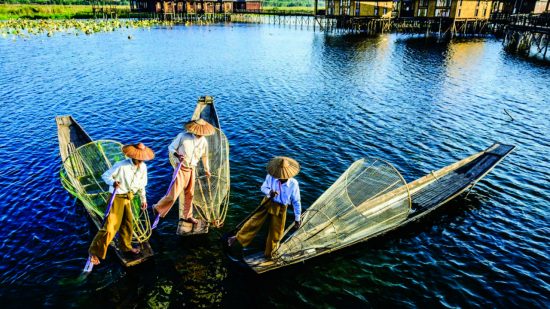 10 things you need to know about the Better Business, Better World report

Get sustainable ideas delivered to your inbox