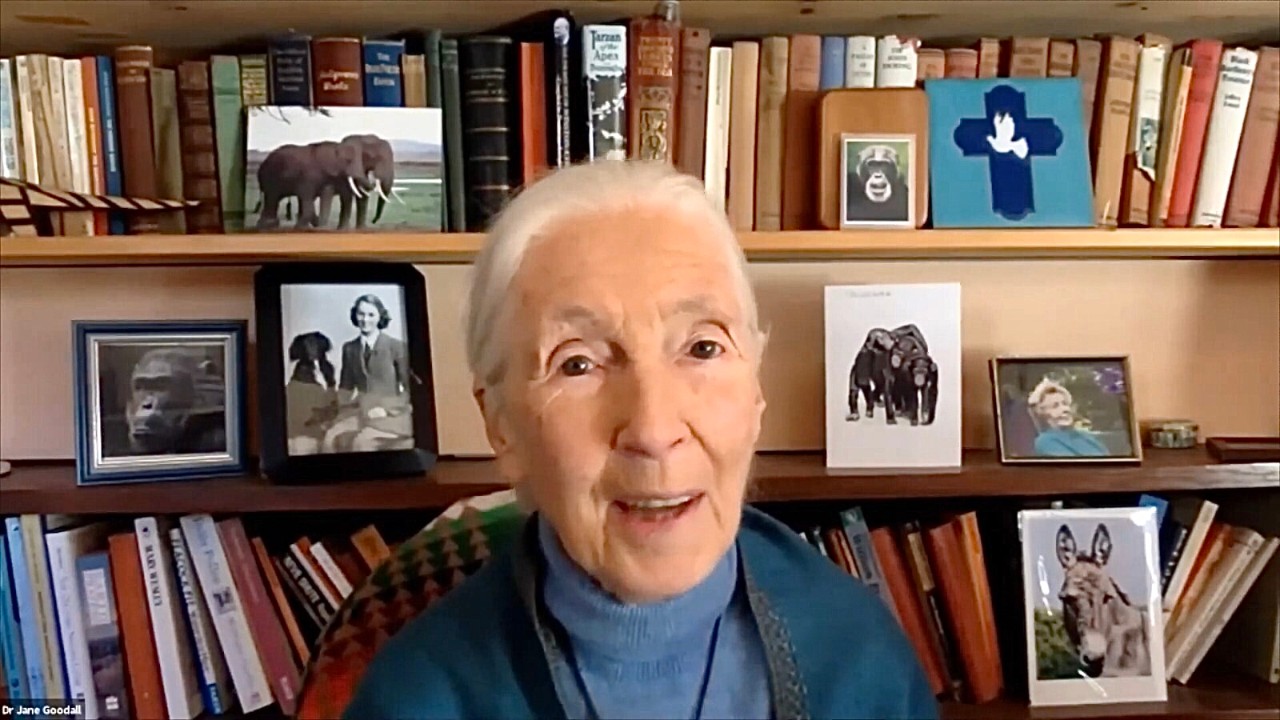 “We are repeatedly told to ‘think globally, act locally’ but it should be the other way around. If you think globally first, you’ll get depressed. But if you think about what you can do locally, if you take action with friends and find that you’re making a difference, that’ll give you more hope and make you take more action,” said eminent conservationist Jane Goodall at the Ecosperity Conversations webinar in September.

Speaking on a panel titled Reconnecting with Nature during Temasek’s Ecosperity Week, she said that without hope, people become apathetic and stop taking action. “I meet so many young people who seem to have lost hope. They are angry, depressed or just apathetic. If young people lose hope, that’s the end of our human species.”

Goodall started studying the social behaviour of chimpanzees in Gombe Stream National Park in Tanzania at 26 years old, and is now considered the world's foremost expert on chimpanzees. She is the founder of conservation organisation Jane Goodall Institute and the Roots & Shoots programme, a bottom-up programme that now spans 65 countries including Taiwan and Singapore.

Humanity currently faces a triple crisis: the Covid-19 pandemic, climate change and the loss of biodiversity. “How have we gotten to this mess? It’s due to our absolute disrespect of the natural world and animals, and the crazy idea that the annual growth of gross domestic product (GDP) is more important than protecting the environment... that short term gains are more important than our future,” said Goodall.

We’re on this planet with finite natural resources and growing human populations—we have to change, we have to forge a new relationship with the natural world.” Jane Goodall, Founder, The Jane Goodall Institute & UN Messenger of Peace

Unravelling the tapestry of life

Humanity depends on the natural world for clean air, water, and food, but what we depend on is healthy ecosystems, said Goodall. "That's why biodiversity loss is as important as climate change."

“An ecosystem is made up of complex interrelationships between plants and animals. I see it as a beautiful tapestry of life. Every time our actions cause a species of plant or animal to become extinct, it’s as though we pull a thread from that tapestry. If enough threads are pulled, the tapestry will hang in tatters, and the ecosystem will collapse,” Goodall added.

Goodall was speaking on a panel with young environmentalists, including Singaporean Ernst Kwok, a law undergraduate and environmentalist. Kwok said that he is often asked about the connections between law and volunteering for non-governmental organisations like Jane Goodall Institute of Singapore.

“The question I usually ask in response is, why isn't everyone involved [in conservation]? We are so intertwined and connected with the biodiversity around us. It should be a part of our daily lives, regardless of what we study or how we live,” he said.

In response, Tan Shi Zhou, president of Earthlink Nanyang Technological University (NTU) said that youths are powerful changemakers, but are often restricted by their own self-doubt. “My advice is to never doubt your ability to have impact, especially within the communities around you,” Tan said.

Raha Islam, Roots & Shoots Club Leader at Chang Jung Christian University in Taiwan, said that there was a need for young people to appreciate the value of resources and learn to live with less. “To conserve, you don't have to be poor, it [conservation] should be a lifestyle — not only when you don't have [money or resources], but also when you have.”

She said the damage that has been done to the world cannot be reversed. “But we can help it from further worsening. That's why we should keep on trying,” she said.

In response, Goodall said that it is not too late to reverse biodiversity loss.

“Nature is amazingly resilient. Places that we've utterly destroyed can become green again and support life. Animals on the brink of extinction can be given another chance. I've written a whole book about these things. It's not too late. We can't go back to where it was originally. But we can start reversing things. And we must," said Goodall.

Goodall's latest book Reasons for Hope focuses on the human intellect, the resilience of nature, the power of young people and the human spirit.

"We talk about saving the natural world for the benefits it gives us, but we should preserve it for itself. We are not here [on earth] to destroy. We didn't create the wonders of the natural world. We're learning more and more about it, about things in the canopies of the forests and the depths of the ocean. We haven't finished learning but we're destroying things before we've learned about them. We have to get together and stop these people from destroying the planet," she said.

Where should youths start?

“Where you begin is with something that you’re passionate about. But you may start in a certain direction and find that ultimately, that isn’t really you. You should never, ever be ashamed to change your mind. Sometimes it takes a long time for a young person to realise what their passions are,” advised Goodall.

“Other times, you may know where you want to go but you don’t know how to get there. When I wanted to go to Africa, it took a long time to save up as we didn’t have money. But do something, do anything, get a job, make some money and eventually, you can still help the environment, and maybe do it full-time,” she added.

Jane Goodall Institute and the Roots & Shoots programme are some starting points that youths can consider as they embark on their conservation journeys.

"The main value of Roots & Shoots is respect—respect for people of different cultures and religions, respect for animals that we now know are sentient and feel fear and pain just as we do, and respect for the environment which we are still destroying. We still have this window of time and we must get together to make use of that," Goodall said.

“We have all the tools now available to us to make change happen. It’s the will that we need, and it’s young people who have demonstrated that they have the will. We can and we will and we must make this a better world for the future. Thank goodness young people are rising up to the challenge,” said Goodall. Next Article
The Impact Revolution